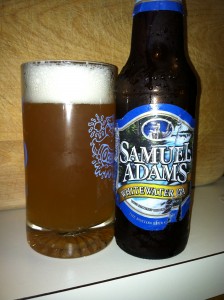 An India Pale Ale is usually all about the hops.  Lots of hops.  Leave it to Samuel Adams to take the traditional IPA and turn it on it’s ear.  Recently, I purchased the Samuel Adams IPA Hop-ology 12-pack.  It contains six different styles of IPA’s  – two bottles of each style.  The Whitewater IPA is the first one that I tried. It is a combination of a white ale and an IPA.

This is a beer that has nice head when poured: white in color and foamy in texture.  The head dissipated slowly though out the experience.  It has medium carbonation and has a murky body clarity (as a white ale has) with a gold tinge to it.

The aroma has floral and pine notes and a slight apricot hint. The initial flavor has an apricot taste on the front then followed with the hoppy/grapefruit taste of an IPA. This India Pale Ale has a nice creamy mouthfeel and has a nice long hoppy finish.

This is a crisp and refreshing India Pale Ale that makes the grade as one to purchase again.