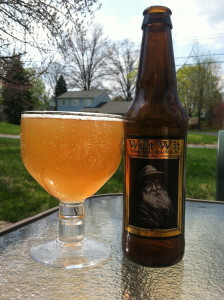 Philadelphia Brewing Company has an unfiltered Belgian White ale by the name of Walt Wit. This is a beer that pays tribute to a statement from the famed American poet Walt Whitman, that once portrayed a sunset over Philadelphia as, “a broad tumble of clouds, with much golden haze and profusion of beaming shaft and dazzle.”

After poured in a glass, the head was small, fizzy in texture and white in color.  The head dissipated quickly and the carbonation was soft.  Walt Wit is unfiltered so it has a hazy body clarity and a nice orange color.  This is where the “tumble of clouds” and the “golden haze” references comes into play. 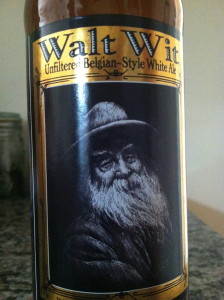 The aroma of Walt Wit has a hint of citrus, clove and a pleasant yeasty note. Tasting this beer, I pick up the citrus and a hop spice that comes in the middle. That is followed by the clove and a feint banana in the background. I also can detect grain and a bready flavor from the yeast that rounds out this beer.

Walt Wit is a great alternative to the heavier Belgian style beers. It has a mouthfeel that is on the lighter side of a medium bodied beer.  This is a good beer to have in the summer. If you have the chance to try one, try it.