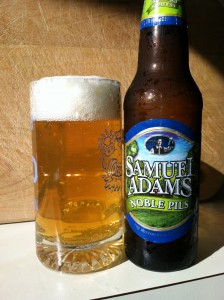 A pilsner style beer also known a pils, is a lager which means that the yeast is a bottom fermenting yeast as opposed to an ale which is a top fermenting yeast. The lager yeast allows for the beer to be fermented at cooler temperatures, thus resulting in a crisper beer. The style is named after the city of Pilsen, Bohemia, that is now part of the Czech Republic where the first pilsner beer was brewed in 1842.  They used partially malted barley as opposed to roasted malted barley, which would lend darker colors and add complex maltly flavors. The use of the partially malted barley gives the beer a lighter flavor and color, allowing the hops to jump through and take the stage. They also used Saaz hops which is a hop found in Czech Republic.

In a tribute to the pilsner style of beer, Samuel Adams steps up and uses the five Noble hop varieties found in and around the Bohemian area within the Czech Republic.  These five hop varieties add complex hop notes to the beer.

When poured, the head is of average size, and is white in color and frothy in appearance. The body clarity is clear with medium carbonation with a nice gold color. The aroma is floral followed with citrus and pine notes.

The flavor of the beer is hoppy.  You get the citrus and pine with a nice spiciness to round it out. The use of the five different hops lends a unique hop experience that is not at all overpowering.  This beer feels great on the tongue and is easy to drink.  It is a crisp and refreshing in the true sense. This one is worth a purchase.