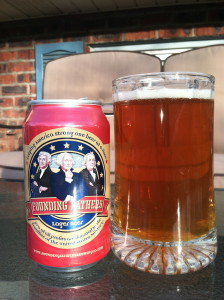 The can looks great.  George Washington striking a dignified pose. Thomas Jefferson on one side and Benjamin Franklin on the other. This has to be a good beer, right?

In the mug, the head was small, white in color and fizzy and the carbonation was soft.  The clarity was clear with a gold body color.

The aroma was more malt and grains.  There is no hop aroma at all.  The taste of the beer…….well there isn’t a heavy malt presence. There is a slight taste of biscuit and hints….hints of caramel malt.  But not much.  There isn’t any hop taste either.  To be honest there really wasn’t much of a taste to this beer.  It is easy to drink and has a very short finish.  This would be a session beer if you wanted to pound them down on a hot day.  One after another after another. But the whole reason to drinking a beer is to enjoy the taste of it. That being said, this beer is still an upgrade from Coors, Miller and Budweiser. 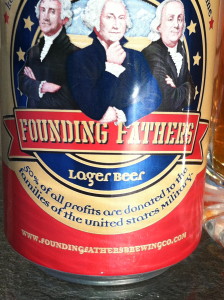 I hate to write this but the best thing about this beer is that 50% of the profits are donated to United States military families. That is a great cause but not enough for me to by another case.